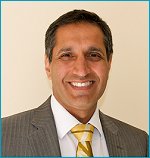 Mr Singh is hard working and patient focused. He is dynamic, motivated, progressive, and is not adverse to change with an approachable and outgoing personality. He has an ambition to develop and embrace new technology and techniques to enhance patient focused care. He facilitates and promotes multi disciplinary team and working to ensure the best possible care for his patients.

Mr Singh was appointed in 1997 as a Consultant General Surgeon with an Upper Gastrointestinal and Laparoscopic interest at Frimley Park Hospital NHS Foundation Trust. During this time he introduced a number of operations to the hospital including laparoscopic extraperitoneal hernia repair, laparoscopic adrenalectomy, minimally invasive oesophagectomy and laparoscopic splenectomy. Mr Singh introduced Endoscopic Ultrasound and he was the first in the area to provide the EUS Service until it was established in the other local trusts. He was the Oesophago-Gastric Cancer Lead when the unit was assessed by the National Peer Review process as being a Centre of Excellence. He is currently an Assistant Program Director for South West Thames Training Program and represents the Royal College of Surgeons of England on Consultant Appointment committeees.

Mr Singh has a keen interest in teaching and has taught and directed courses locally, nationally and internationally. He has instructed on subjects that include Basic Surgical and Laparoscopic Skills, Laparoscopic Hernia and Gallbladder Surgery, Endoscopic Ultrasound, Training the Trainers, Assessment and Appraisal, Care of the Critically Ill Surgical Patient and Minimally Invasive Oesophago-gastric Cancer Surgery.

Mr Singh spent 18 months at the University of Surrey researching host defences in Obstructive Jaundice. The project was the basis of his Master of Surgery thesis which was awarded in 1993 and shortlisted for the University of London Rogers Prize.

High rates of Acute Laparoscopic Cholecystectomy are achievable by an Emergency Surgical Team but may be best performed by Upper GI
Surgeons
Mann K, Malhan N, Bond A, Paterson I, Singh S
Accepted for presentation May 2011 ASGBI Annual Meeting

Qualification (what do the letters mean?)

MBBS – Batchelor of Medicine and Surgery

FRCS (Ed) – Fellow of the Royal College of Surgeons of Edinburgh

FRCS – Fellow of the Royal College of Surgeons of England

Married with three children and as a consequence has very little free time, however his hobbies include scuba diving and winter sports.